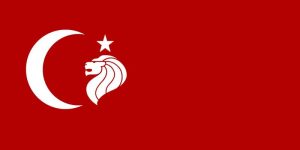 Seems like another Fox property will be trickling its way into the MCU like with S.W.O.R.D. debuting in WandaVision. Due to recent photos showing a prop barring the symbol of the fictional island of Madripoor. Notice the crescent moon and lion seen on the left wall near the ladder in the photo below. It looks identical to the one seen on Madripoor’s flag.

Is that what’s at Wimblish tonight? I kept looking up from my desk at work to see this table covered with… squid? pic.twitter.com/cPy0QF1ksp

However, there’s no telling whether this will simply be a brief visit to the fictional nation or that it will play a key role in the show. In the comics, it was actually ruled for a time by HYDRA affiliate, Viper. It also has a strong connection to Wolverine and the rest of the X-Men. This marks the second use of a Fox property that we know of since the deal was complete and I imagine that only more will come.

The post ‘The Falcon and the Winter Soldier’ Will Introduce Madripoor appeared first on MCUExchange.